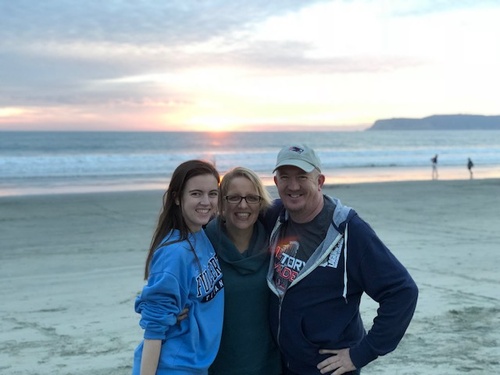 I am originally from Brockton, Massachusetts. Most people can guess that after talking to me for five minutes! My wife Charlette and our children relocated here in 2010. Charlette, originally from Coronado, grew up going to Christ Church and attended CCDS. I am the youngest of 5 children. My father was a High School English Teacher. He also taught drama. My mother was a Nurse. They both had very green thumbs, which meant that weekends consisted of a lot of yard work for my siblings and me. My mother was also a fantastic cook. If there was a cooking gene, she passed that on to me. Although it wasn’t until I was twenty that I realized it would become my career. I spent some time studying at Johnson & Wales University in Rhode Island and trained at the Cranebrook Tea Room in Carver, MA, and at The Parker House Hotel in Boston.

Life got in the way and I had to step away from cooking for a while. Twins and a separation after a short marriage will do that. But after about a year, I felt the tug back into the kitchen. My first job back was at The Inn at Harvard, a small boutique hotel in Harvard Square, Cambridge, MA. This is also where I met Charlette. She was walking through the kitchen on one of my first days, giving a tour to her grandfather Ray. I was quick to ask a co-worker “who is that?” The story of what happens next depends on whether you ask Charlette or me. But in either version, I ended up transferred to a sister hotel! It was there, at The Boston Harbor Hotel, that my passion for cooking, creating and wine took off. I learned more at that property than I ever could have at any school.

Time marched on. We moved to Texas and back again. My career progressed, and Charlette and I got married. We purchased our first house, a 106 yr. old antique farmhouse, in Weymouth MA. Not long after that, Karen Ray was born, completing our family of five! We stayed in that house for a few years but then decided that we needed to be closer to Erin and Ryan (the twins). We found the perfect location in Pembroke, MA.

We also found St. Andrew’s Episcopal Church one town over. We became involved very quickly. Myself, in the kitchen (of course!) and on the vestry. Charlette, beginning a kid’s choir. Both of us, lending ourselves in other areas as well.

We knew that Pembroke was a temporary location for us. Not because we didn’t like it. It was fantastic! But Coronado was always the goal. We just were not sure when. In 2010, Charlette’s sister became pregnant and Charlette wanted to be home. The timing was good. Erin and Ryan were heading off to college, UCLA & Northwestern, and Karen Ray had one year left of elementary school.

Here we are, 10+ years later. Charlette, very involved with the Church and her “Alma Mater”. And me? I dabble a little bit here and there. But usually, 2020 aside, you can find me either in the back pew or in the kitchen at Christ Church... cup of kitchen coffee in my hands, and a smile on my face!