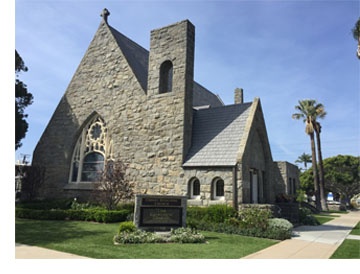 Christ Church was established as St. Peter's Mission in Coronado in the year 1888. In the years between 1888 and 1896, the church struggled to grow and to build a suitable building for the worship of God. In 1891, $800 was donated to buy several lots to build a church. The money purchased the land and the people began a building fund. Unfortunately, the savings account was wiped out in a bank failure in 1892. In 1893, the church was still struggling to save money for a building when a new parishioner, Charles Thomas Hinde, joined the parish. Captain Hinde was a very successful businessman who located in Coronado at the urging of John D. Spreckels.

At 4:00 p.m. on September 19, 1894, the cornerstone of the building was laid, and the Gothic-style building was begun. The spring of 1896 saw the completion of the building with the exception of the organ and stained glass windows. During the building process Captain Hinde and his wife decided to give the building to the parish as a memorial to their beloved only child Camilla, who had died at a very young age. The loan to the Church was canceled and a bronze tablet memorializing little Camilla was ordered.

The essential elements of the building remain the same to this day, the high ceiling, the huge diagonal beams and the finished oak woodwork. The first pipe organ arrived in May, 1896; it had 24 registers and 835 pipes. (The organ now in the church is its third organ and was added in 1973.) Finally, in 1896 the stained glass windows traveled around the Horn of Africa by sailing ship and were installed in the church. The windows were created by Bruce Porter of San Francisco. Mr. Porter personally supervised the installation of the windows and was paid the princely sum of $5,100.

The windows are one of the great treasures of Christ Church. The great east window was made of light colors to suggest the dawning of a new day. The two angels symbolizing Light and Truth bear the lamp and the scroll of the scriptures. On the scroll is written John 14:6- "I am the way, the truth, the life; no man cometh unto the Father but by me." Above the angels is the exquisite rose window. This window was described by Mr. Porter as the "Benediction Window." The side windows were designed with simplicity to compliment the great windows. The chancel window consists of the rich deep tones of the sunset representing the close of the day. The portrait of Christ waiting at the door depicted in the central panel has been a basis for meditation since its installation. The lancet windows on the sides depict the symbols of Communion. In 1899, the windows were installed for $6,100; today they are considered priceless.

The Church that had existed for eight years as St. Peter's Mission was now to have a new name. On May 16, 1896, the Parish of Christ Church came into existence, and a year later in June 1897, Mr. Hinde deeded the land and building to the parish.